What exactly does "Inpatient" mean?

I'm constantly amazed by the complexity of medical terminology. A lot of unnecessary heartache comes from the unappreciated differences in understanding between different parts of the clinical care team and other billing/administrative stakeholders.

In modern healthcare, there are a few words which can trigger a special level of confusion, and surprisingly one of them is the word "inpatient". It is one of the most context-sensitive, role-dependent words that I can think of, commonly used across the table in healthcare operational and workflow discussions.

What exactly does it mean, how does it work, and how can it be misunderstood?

1. THE HISTORY
While I'm not an expert medical historian, the history of the word "inpatient" likely derives from the 200-or-so-year history of healthcare. Most hospitals were not really hospitals like we think of them today - They were charity and alms houses, often with beds, with nuns, nurses, and practitioners/physicians tending to sick and dying patients in them.

What I found out is that our hospital was once, back in the late 1800s, a simple house, on a hill, donated by a local farmer to help tend to the sick in our area. "It was a place where old and sick farmers came to die," they explained to me. "And then, one day, penicillin arrived - And suddenly, the farmers didn't die, but actually felt better and wanted to go home." And voila - The discharge process was born.

Taking care of these patients, 24/7, inside the 'house' took a lot of work and attention. Unfortunately, the local community physicians weren't available 24/7 (many had families!), so how exactly did they care for patients 24/7 when there were no physicians available?

In most academic hospitals, there were younger student doctors, who as part of their training agreed to basically live "in" the house - Hence, the name "Residents", since during training they were basically committed to living inside the house, while the Attending providers went home at night to their families.

Meanwhile, in many community hospitals, this was probably a complex situation for the nurses, who fought heroic battles to keep their patients alive and comfortable until the morning, when the community providers would return and do morning rounds in the hospital. Remember, it was the 1990s when Hospitalist medicine was born, so before that - I can only imagine it must have been a difficult situation for nurses who fought for their sickest patients. (If you know any nurses from this era, make sure you appreciate them.)

In any case, from this era of healthcare, came two important concepts : 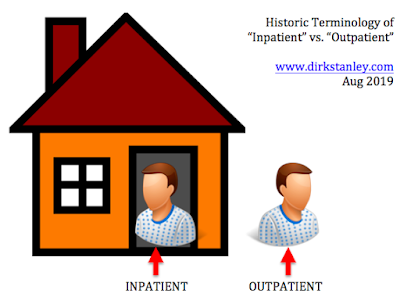 During this era, this terminology was probably somewhat helpful in judging patient acuity, e.g.:

And so, healthcare appears to have made it through the 1960s-1970s with those terms mostly intact.

2. THE LEVELS-OF-CARE
In the 1960s and 1970s, with increased technology, specialization, and standards, the price of healthcare increased. Eventually payment reform became necessary to help control the costs of this care.

So to help better understand patient acuity and care needs, two terms became important - Taken from https://casemanagementstudyguide.com/ccm-knowledge-domains/healthcare-management-delivery/levels-of-care/ is this :
So these terms were stratified to help better organize our healthcare system. In general : 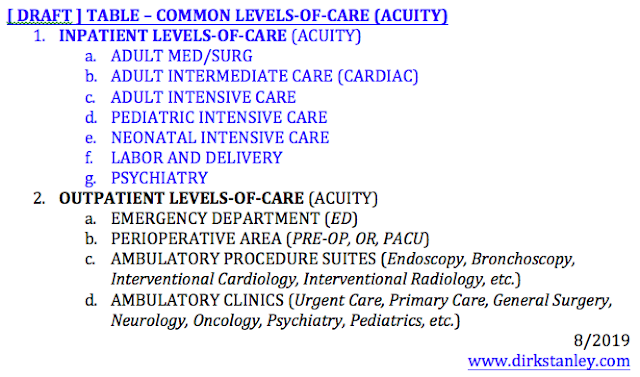 Looking at the above list, one might ask, "Why is the Emergency Department considered an outpatient level-of-care/acuity? Don't they have really sick patients?" The answer is yes, they often do have sick patients - But :
... the Emergency Department is kind of an unusual hybrid patient care location, staffed with critical care-trained doctors and nurses, but is still considered an outpatient patient care location (even when they have patients with inpatient acuity needing an inpatient level-of-care).

And with regard to nurse training and staffing? Generally, nurses train and staff uniquely in each of these levels-of-care. (Interesting note : Staffing usually depends on the routine vitals!)

And finally, with regard to "bed" management?

So this level-of-care index was at least a little more helpful in roughly estimating a patient's acuity, and for planning the kind of care that would need to be delivered in these locations.

3. THE PHYSICIANS
With these newer, better-defined levels-of-care, some providers started to distinguish themselves and their clinical practices :
And so physicians started to define and stratify themselves - again with the curious hybrid of the Emergency Department, where modern ED providers have critical care training but are still considered to be working in an outpatient location, hence, are technically outpatient providers.

4. THE BILLING STATUS
Once upon a time, the terminology was pretty simple :
But as the price of healthcare continued to rise in the 1980s, this was too granular a concept, and some payors started to question whether everyone in the hospital really needed to be admitted to the hospital - Did they all need to be inpatients? (Were they all really that sick?)

So again, new terminology was developed, to help distinguish :
Unfortunately, the use of the billing status "INPATIENT" can be easily confused with the level-of-care/location "INPATIENT".

5. THE SUMMARY
So it's entirely possible to have :
And during that emergency code, the OUTPATIENT ED PROVIDER may come to work on the INPATIENT (currently in OBSERVATION status) in an INPATIENT LEVEL-OF-CARE/ACUITY and in an INPATIENT LOCATION, along with nurses trained to deliver inpatient care.

And after the code, if the patient is sick and is estimated to require more than 2 midnights of care in the hospital - the INPATIENT HOSPITALIST may ask the Case Manager to change their CMS Billing Status from OBSERVATION/OUTPATIENT to INPATIENT.

Makes perfect sense, right? It can be complicated! Unfortunately, our healthcare system is somewhat limited by the lack of terminology development, so I thought I'd summarize it here : 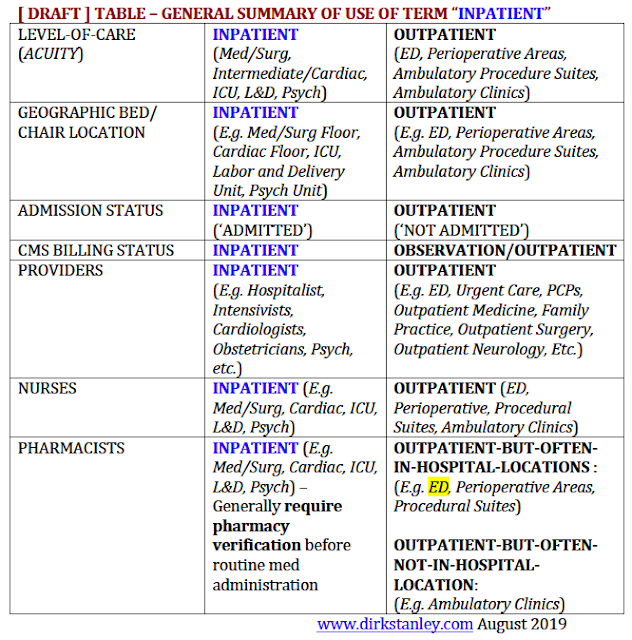 Hope this helps! Need help interpreting or translating during discussions? Ask your own Clinical Informatics, Health Information Management, or other Clinical Operational leadership for help!

Remember, this blog is for educational purposes only - Your mileage may vary. Have any stories to share about translating this terminology? Have ideas of how to simplify? Feel free to leave in the comments below!
Posted by Dirk Stanley, MD, MPH at 12:52 AM

And with hospital in the home, patients outside th hospital can be termed inpatients while ambulatory patients receiving care in hospital are termed outpatients. Go figure.