Van Halen and why Informatics is not IT

One of the things you get asked commonly, when you work in informatics is, "Are you an IT guy/gal?"

Informatics is commonly confused with IT (Information Technology). But the two are very different. Allow me to explain.

Definitions about informatics vary widely, but I personally take the everyman's, common, "Ernest and Julio Gallo"-type approach - It shouldn't be something that's scary, unapproachable, or unaffordable. I hope to deliver good informatics to your dinner table at a reasonable price in a way that everyone can enjoy. So when I had the opportunity to help, I added the part about "right information to the right person in the right place at the right time in the right way" to the definition in the Wikipedia article on informatics (academic field). Just sounds so much simpler, approachable, and friendly.

1. THE FIRST EXAMPLE
The first example of informatics without IT comes from a business professor I had back in college, who did informatics consulting for businesses. He told us this story of a large, popular European furniture company with a quality problem they were having.

The issue, he said, was this : The company had a table they were selling which was often getting returned. Why? "MISSING HARDWARE!" was the most common reason reported by unsatisfied customers.

The company had tried several times to fix the problem on their assembly line, to no avail. Despite their best efforts to remind workers to put all the right pieces in the box, the workers still sometimes forgot.
So reportedly this informatics consulting company examined the assembly line closely : 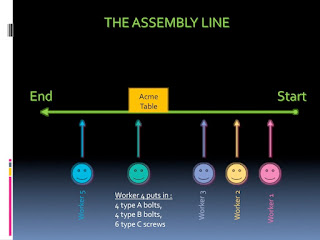 The trick was to get him to remember to put in all three types, every time.

How to do this? They looked to establish something informaticists generally call "cognitive feedback" or "visual feedback" - Where a person gets some immediate feedback/verification of, "Have I done the job right?". And they found the solution in the factory lunchroom, where reportedly the lunch trays just happened to have three pockets in them : 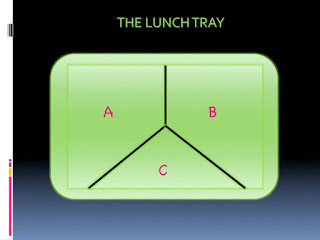 Using a magic marker, they labeled each pocket with an A, B, and C, to create a tool to provide the factory worker with cognitive feedback during his part of the assembly line. 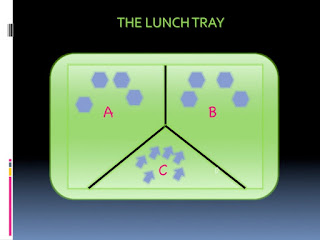 Voila! This provided immediate visual feedback/confirmation to the worker that "Yes, you have remembered all three", allowing him to then dump the tray into the box, knowing the task had been completed properly.

And as the story goes, after this change, their quality problems disappeared. All for the price of a $4 lunch tray. The table reportedly ended up being a big hit.

2. THE SECOND EXAMPLE
The second example of Informatics without IT was given to me by the same college professor, who used to do informatics consulting. He was hired to study the waiting times at a large fast-food burger chain. Their issue : "We are losing customers, and can't figure out why." Customers told the chain : "Service is too slow", and no matter what the company was doing to speed up operations, they were losing customers.

So apparently he and his buddies spent a whole week trying to crash one of this burger joint's restaurants.

Then they paid very close attention to the crowd during lunch, and heard someone take advantage of the resaurant's jingle at the time : "Hold the pickles, hold the lettuce, special orders don't upset us." The order they heard?

"Um, I'll have a double cheeseburger, extra-well-done, with extra lettuce, no tomatoes, no onions, ketchup but no mustard, extra pickles."

The restaurant handled this order just fine, but his team noticed that if the person said the order loud enough, during a busy lunch crowd, suddenly everyone else wanted their burger done their way.

So they tried it out the next day, during a busy lunch hour : Two or three of his team ordered their custom burgers, loud enough that people towards the back of the line could hear. It set off a chain reaction that slowed the restaurant to the point where the line went out the door. Customers left in frustration.

Their advice to the restaurant : Lose the jingle. It's OK to allow customers to do custom orders, but if you advertise it, you're only asking for trouble.

So they got rid of the jingle, and reportedly the waiting time went down, and satisfaction went up. 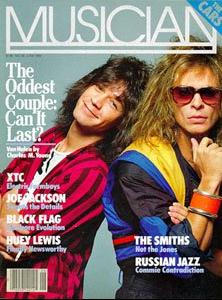 Ever heard of the popular mythology of their concert contract demanding they have no brown M&Ms in their dressing room? As a child of the 80s, I remember hearing about this - It became a little joke of rock-n-roll culture, even parodied in movies like Wayne's World when Wayne gets to walk backstage at the Alice Cooper concert. It's the inside joke of roadies and concertgoers everywhere.

Get ready - It's not a myth! TheSmokingGun.com even has an actual copy of the Van Halen contract rider, which you can read by clicking here. But rather than just juvenile rock-star excess, both TheSmokingGun and Snopes.com go on to explain the real purpose of this request :

The issue was that the band was touring with some very hefty equipment : Large light shows, elaborate sets and music, etc - And there were a lot of technical errors happening. The girders couldn't support the weight of the sets. The flooring would sink in. And despite their contract having very clear instructions of what it would take for the band to perform safely, it seemed people weren't reading the contracts fully.

So by adding the clause :


"Article 126 : There will be no brown M&Ms in the backstage area, upon pain of forfeiture of the show, with full compensation."

it allowed the band to quickly determine if the contract had been read in detail, to give them some confidence that all of the technical specifications had been met.

In other words : They had immediate cognitive/visual feedback about the adherence to the contract and performance of the safety design. An easy way to see failure before it happened!

What genius! (I know David Lee Roth later became an EMT - I wonder if he's involved in HealthIT today?)

So ask yourself : What are your brown M&Ms, and can they help your safety discussions?

It's all about getting the right information, to the right person, in the right place, at the right time, in the right way - Doesn't necessarily have anything to do with computers at all. And hopefully by doing that, you'll help save the world. (Or at least make it a little better place to live.) :)

Great take on Informatics, IT or HIT is a very overloaded term. Many think that I am HIT or IT because I have a Computer Science degree and about to finish my Grad program at OHSU Medical school in Informatics. Software Engineers like Medical Informaticist are also not HIT. If you are a Healthcare administrator and you do not know this, it can be very costly to your organization. The Gal that setup your desktop computer 3 yrs ago should not be selecting your EHR. that takes a different qualification. Yes, it is confusing to all of us.

Industrial engineering and about fifty other things, yes!